A record number of Americans renounced their US citizenship last year, what we call expatriation, but should this be surprising, as more and more US persons find out about their filing obligations and the complexity involved.  I suspect the greater numbers are due to increasing tax awareness on a number of fronts combined with the significant complexity of foreign reporting and difficulties dealing with foreign financial institutions.

In February 2016 we saw a great increase in calls to our office about expatriation following an article on the BBC news website talking about the 2015 increase to 4,000+ (http://www.bbc.co.uk/news/35383435).  In February 2017 there was more focus on a particular individual who had renounced his US citizenship in 2016, our Foreign Secretary Boris Johnson, than the overall numbers but they increased again (http://www.telegraph.co.uk/news/2017/02/11/number-americans-renouncing-citizenship-reaches-record-high/).  Both articles had a similar message on FATCA in both articles.

I have wanted to write a post on this topic for some time as some points in these articles seem a little more alarmist and are not what I see day to day.

Expatriation is the process by which a US citizen renounces their citizenship at the US embassy.  As a reminder US citizens are subject to US tax on a worldwide basis regardless of where they live.

The number of US citizens renouncing their citizenship or expatriating (that is handing back the passport) has increased from circa 1,000 in 2010 to 5,000+ in 2016. 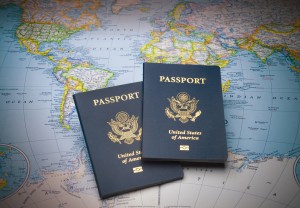 Expatriation because of double taxation?

In the BBC article one focus was that double taxation of pensions and savings was driving this increase.  The article was based on the experience of a French lady who had just renounced her US citizenship primarily because of double taxation and because she could not open a  bank account (more on that later).

As a starting point there is generally not double taxation for a US citizen as we would think of it as a tax adviser – that would be paying tax twice on the same income. The majority of developed countries have tax agreements in place referred to as a ‘Treaty’ that agrees between governments who will have the taxing right on certain types of income and gain for certain individuals.  The US also gives foreign tax credits where foreign income is subject to tax in another jurisdiction.  In theory, this makes sure you only pay tax once.

There are double tax agreements between the UK and US and France and the US which cover the majority of situations that a US citizen might find themselves in and broadly making sure that any item of income is taxed only once in one country or the other.  They are not perfect and there are occasions when outcomes might not be satisfactory but they are usually more complex situations.

Expatriation because of forms and penalties?

While double taxation might not be an issue there are punitive penalties for not filing the correct forms and potential asset based penalties for those who have wilfully failed to file US returns or omitted to report foreign income.

The emphasis then is on the necessity of having the knowledge to interpret the treaties, correctly complete tax returns and all the necessary information reporting in order to avoid difficulties and penalties.  At this point professional help becomes crucial.

So part of the explanation, is the fear of a mistake, the need for a professional adviser and the complexity of reporting that is driving individuals to expatriate and the increase of numbers I suspect is also largely down to increasing awareness.

Expatriation because of FATCA?

There is another factor and that ties in with increased awareness and covered by both the BBC and Telegraph articles.  They suggest that regulations and FATCA mean that US citizens can not open bank accounts.

FATCA (Foreign Account Tax Compliance Act) was first announced in 2010 and broadly requires financial institutions to report to the IRS, via HMRC, US citizen account holders.  The first reaction of some institutions was to close their doors to US citizens and for some institutions that is still the case, however times are changing and FATCA is now more widely accepted and most banks in the UK, I believe, will open accounts. At the end of the day we have hundreds of clients and they all have bank accounts.

With the increased awareness more people who did not necessarily identify as an American realise they need to file, more Americans long term settled in the UK decide they don’t want to deal with the compliance and will decide expatriation is the way to go.

Of course in the mix will always be individuals who expatriate for specific tax avoidance purposes to avoid paying US taxes on upcoming transactions or US estate tax.  That in itself is not straightforward due to the potential of being a “covered expatriate” and the application of an “exit tax” brought in in 2008.

In my experience, many Americans do want to retain their passport and the issues of US tax can be handled with the right professional help.  Not to forget that there are undoubted advantages to US citizenship aside from patriotism!  Expatriation is usually the last resort.  It remains the case, that most of the people I see expatriating are those with very limited connection to the US, who are overwhelmed by the complexity and cost of foreign reporting.